For all of you who’ve wondered to yourselves – What is Mentalism? – this is the article for you! Mentalism is often associated with the supernatural realm. In reality, however, the typical mentalist does not practice magic or have supernatural abilities. Instead, Mentalists have keen observational skills and the ability to use these collected observations to establish accurate theories about people, circumstances, and events.

One of the best-known mentalists in the modern world, albeit a fictional one, was detective Sherlock Holmes. He made deductions that seemed downright magical to others when he was simply using his brain at a greater capacity and in a far different way than the average person.

There are a few types of mentalism, but the most popular ones are hypnosis, telepathy, and clairvoyance. There are also other categories like divination and precognition you might not be familiar with. This art can defy all logic and dates back centuries. You might remember studying the Ancient Greeks and learning about Oracles and Seers which could be seen as mentalists during their era.

Now that you’re up to speed on the basics, let’s dive right into it.

What Mentalism is All About

Before answering the most popular questions, do yourself a favor and take a look at this short and sweet video to realize just how potent Mentalism can be:

Even though Lior Suchard boggled their minds and made it look like some sort of impossible magic, mentalism is absolutely real. It isn’t hard to see why people have often assumed that mentalists have some sort of magical power. Once people become more adept in using parts of the brain that are commonly left on auto-pilot, they appear to become far more intuitive, knowledgeable, wise, and understanding.

Their ability to see into people is astounding and does indeed have an other-worldly quality. This quality comes in part from constant surveillance or even hyper-vigilance. Hyper-vigilance occurs when a mentalist is able to identify, record and recall every detail of his or her surroundings even after just the smallest amount of exposure. A good mentalist also has the ability to train the mind on details that are most relevant to what he or she wants to know.

So if it’s real you’re also wondering to yourself – are mentalists real as well? The answer is obviously yes.

Although there are no such thing as “psychics” and “clairvoyants”, the abilities that are commonly linked to them are performed by mentalists. Some of your favorite mentalism tricks are used by famous magicians like David Blaine and Chris Angel, the “Mind” Freak. These types of performers differ from typical magicians because their goal isn’t to trick their audience – everything that happens is based on real information and pure skill. Most mentalists won’t even include magic in their routines for this specific reason.

A great example of this was on Britain’s Got Talent. A young man known as Colin McLeod (stage name is Colin Cloud) is a self proclaimed Mentalist who is able to read minds and attempts to influence the judges. His act involves the hosts, judges, and makes no attempt to demonstrate magic. His mentalist tricks leave the audience and judges confused and amazed.

Mentalism is popularized today on television. You might be familiar with the television shows “Psych” and “The Mentalist”. Both of them feature a character who has unbelievable observational skills, remarkable photographic memory, and somewhat unrealistic hyper sensitive vision. All these things combined make them successful criminologists and enable them to solve cases for their respective police departments.

The characters Shawn Spencer and Patrick Jane are both raised by their parents at a young age to take in the world around them. Shawn is raised by a police officer who forces him to do things like recite the number of hats in a room. Patrick is raised by a Mentalist as well who teaches him this art. This makes both shows quite true to life and show that it’s not just a supernatural skill but that you’ve got to work hard to achieve it.

Now that you know it’s real, let’s dive in into how it all works.

Mentalism works, in short, by reading someone’s body language, their facial cues, their reactions and, in some ways, by influencing what they think, do or say. It’s not magic, although it can appear to be, but an extreme degree of skill instead that’s only achievable with training and lots of practice.

Mentalism can be used not only for simple “tricks” but also in other professional areas such as law and business and even in your personal life as it allows you to read people like a book, letting you know if someone’s lying or not, for example.

Let’s dive into one of the most popular uses of mentalism – reading minds.

The illusion of telepathy is an act used for minding reading. As we know, telepathy is the transfer of information from one person’s mind to another. Let’s be honest this feat is impossible, thus making it an illusion. One of the main tools in any mentalist’s arsenal is their innate ability to be able to influence people and to pass judgement. A mentalist is just as it implies, in your head.

Let’s face it, nobody knows how to read minds through telepathy. After learning how mentalism tricks work you may even find them boring. There are tons of amazing tricks that you may think are complicated that end up being very easy. You will know when a mentalist is trying to influence you when he asks for input from the audience. He is trying to make the show feel real by selecting someone when all he is doing is choosing someone susceptible to his tricks.

Being a mentalist you need to be confident. A mentalist needs to be able to put on a show and make quick judgements based on reads. When I say reads, I mean what you see Shawn, Patrick, and Sherlock Holmes do. They use their superhuman power of observation. A mentalist might look at a potential person and analyze their body language and make a snap assumption. For example, their posture, clothes, hair, and shoes. These characteristics tell a lot about a person. You might even have a tan line on your finger where a ring might have been; leading the Mentalist to assume you are divorced.

Another great example of reading people is demonstrated in the Television series, Lie to me. In the show Lie to me, the main character Cal operates a firm that reads faces and micro-expressions. Believe it or not facial expressions are actually universal. The languages we speak and the words we use to describe things may be different, but the facial expressions are the same. When you are sad, scared, exhausted, nervous, or mad, they all look the same on every person. There are hundreds of micro-expressions and a Mentalist can use these to see how certain cues affect you.

Use a mirror and yourself to test how these things actually work. Think of micro-expressions like sadness and nervousness and look at how your body language changes. For example let’s look at the following things.

All micro-expressions can be read and can be used for your advantage when practicing Mentalism. That is why I referred to this as an art. There is a lot that goes into becoming a Mentalist and picking up on micro-expressions is one of them.

Mentalists all have a few things in common. They practice the same types of things because this is essentially basic psychology. You need to be confident when practicing your craft. Think about how Presidents and Governors get elected. If you are younger, think about how your High School class President got elected. A lot of what you say in life is how you say it. If you are giving a cue or are trying to state something like it’s fact, you need to believe it is. If you believe it then they will. You need to listen with your eyes open.

Listening is more than just what someone says, granted what they say is also important. Listening with your eyes is about looking for those micro-expressions and seeing how a person reacts to various cues. With these cues you will start to gather tells about a person.

When I first got started trying to become a mentalist I was watching “Lie to Me”. I love this show because it goes over verbal cues and micro-expressions. They don’t really go over cold reads but they demonstrate in slow-motion how micro-expressions are able to be read in the eyes of a trained mentalist. After watching “Lie to Me” I watched “Psych” and liked how they showed the main character solving crimes with his gift. You get an idea of the hyper visibility as he approaches a crime scene and instantly detects problems. Patrick provides more a deeper intellect. While these are just shows they are all practical in their application which is why they’re great.

There are people who make a living off this and do it well. Becoming a Mentalist takes time but with the right training you can achieve it easily.

Practicing mentalism really isn’t something that you can do by simply picking up a few parlor tricks. Instead, mentalism must become a way of life. It is a diligent, focused effort to exercise the mind and take advantage of its true capabilities.

It takes time, practice and a willingness to stay focused in order to increase surveillance skills, short and long-term memory and reasoning and deduction skills. It is also important to confidently proceed to deductions without fear of being wrong.

Over time, mentalists become increasingly adept at identifying the physical signs that someone is telling a lie, noticing tell-tale clues concerning how a space was entered and used and other key facts that make it easy to accurately determine how events have played out or who people truly are at their cores. 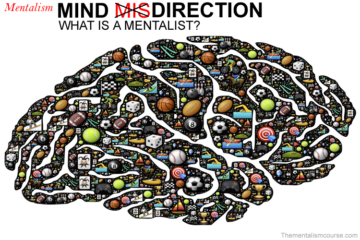 Most love the intrigue around mentalism. People are blown away by mentalism magic and many are left thinking mentalists are mind readers. So let’s take a look at 7 mentalism secrets… Top Mentalism Secrets Exposed in 15 Read more…